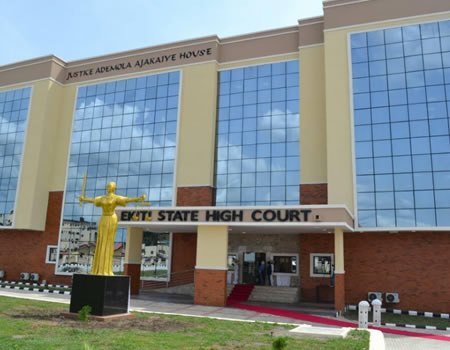 An Ekiti State High Court Sitting in Ado-Ekiti today, Monday August 19th, 2019 has set aside an order Nisi in the sum of Two Hundred and Fourty Two Million Naira obtained by Guaranty Trust Bank ( GTB) against the Government of Ekiti State.

Guaranty Trust Bank had obtained an order Nisi from the court attaching the sum of two hundred and forty two million in the account of SUBEB.

The Honourable Attorney-General of Ekiti State. Olawale Fapohunda in his submission had urged the court to set aside the order Nisi on grounds that the order was obtained by misrepresentation of the facts in the matter.

Fapohunda argued that aside from the fact the consent of the Attorney- General was not obtained before the Plantiff. commenced ganishee proceedings, the State Government was never served the order of the court which was fatal to the plaintiffs case.

He argued that the reasoning of the plaintiff that the judgement debtor was not a proper party in ganishee proceedings is not supported by the recent Supreme Court decision on the subject matter.

Citing the recent decision of the Supreme Court in Gwede v. Delta State House of Assembly & Anor (2019) LPELR-47441(SC), Fapohunda submitted that it is now settled that in proceedings for the grant of ganishee order absolute, the judgement debtor is a proper party.