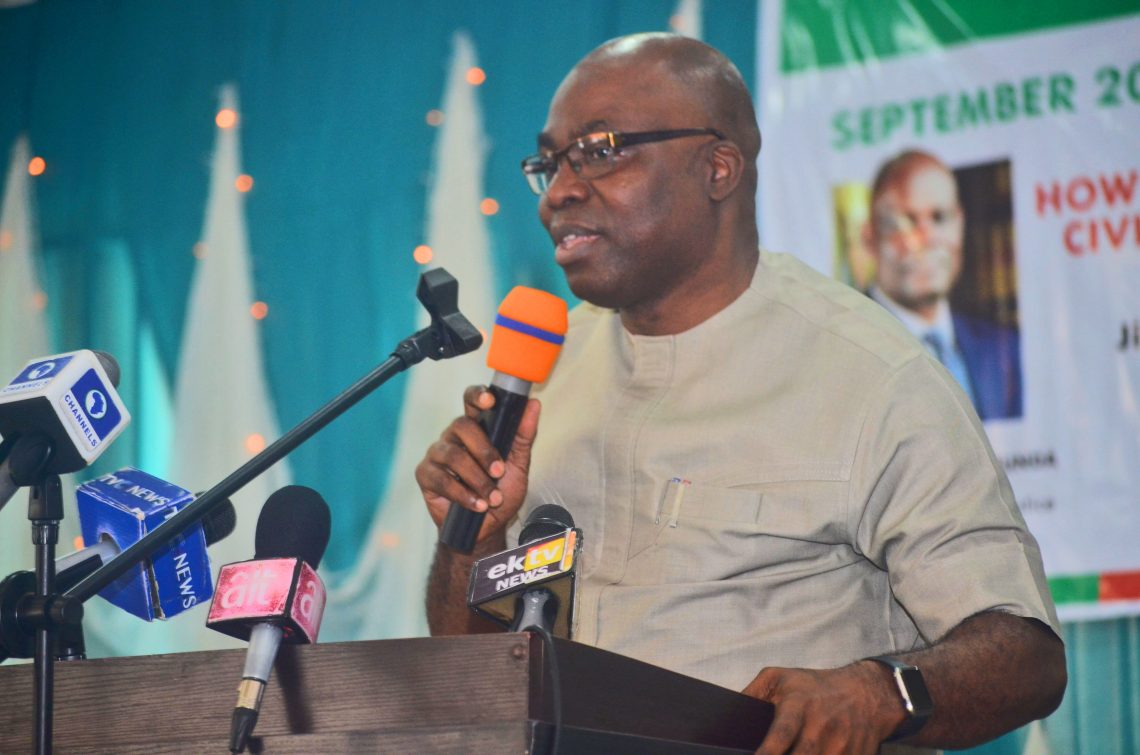 The Chairman of the Independent Corrupt Practices and Other Related Offences Commission (ICPC), Professor Bolaji Owasanoye has charged Public Servants in Ekiti State to make honesty, transparency and Integrity their watchwords at all times.

The ICPC Boss made this charge while delivering his Lecture yesterday, Thursday September 19, 2019 in Ado Ekiti at the Ekiti State Attorney General’s September 2019 Colloquium hosted by the States Ministry of Justice Academy.

In his Lecture titled: “How the mandate of the ICPC Affects Civil/Public Servants in Ekiti State”, he described Corruption as the abuse of entrusted power for private gain and urged the Public Servants to strive to be above board specifically in matters relating to management of state finances. Owasanye identified a number of Red-Flags and what he termed “Banana Peels” which civil servants should avoid.

Owasanoye who arrived Ekiti State on Wednesday September 18, 2019 ahead of yesterday’s event had held a closed door meeting with the management of the Ministry of Justice.

Also speaking at the Public Lecture, Mr Ayodeji Ajayi, Ekiti State Head of Service, urged workers in the State to take advantage of the unique opportunity provided by the lecture to better appreciate the anti corruption laws and practices. According to him ignorance of the law is no excuse.

The Attorney General and Commissioner for Justice, Olawale Fapohunda had earlier in his remarks identified several initiatives of the Fayemi’s Administration aimed at removing the temptation and contemplation of corruption.

According to him, “Removing temptation to corruption includes ensuring that salaries of Civil Servants are paid and promptly. The administration has also put in place deliberate measures to achieve efficiency and transparency in the public procurement process.

Fapohunda explained that the colloquium was the contribution of the Ministry of Justice to the understanding of corruption in the Public Service of Ekiti State.

He said that the Ministry of Justice has identified specific areas of collaboration with ICPC and will shortly announce a partnership that is beneficial to the Government and People of Ekiti State.

The event was attended by the Secretary to the State Government, Biodun Oyebanji, the Chief of Staff to the Governor Biodun Omoleye, top Government functionaries, Political Office holders, Public officers, legals officers as well as Students from various institutions in the State.