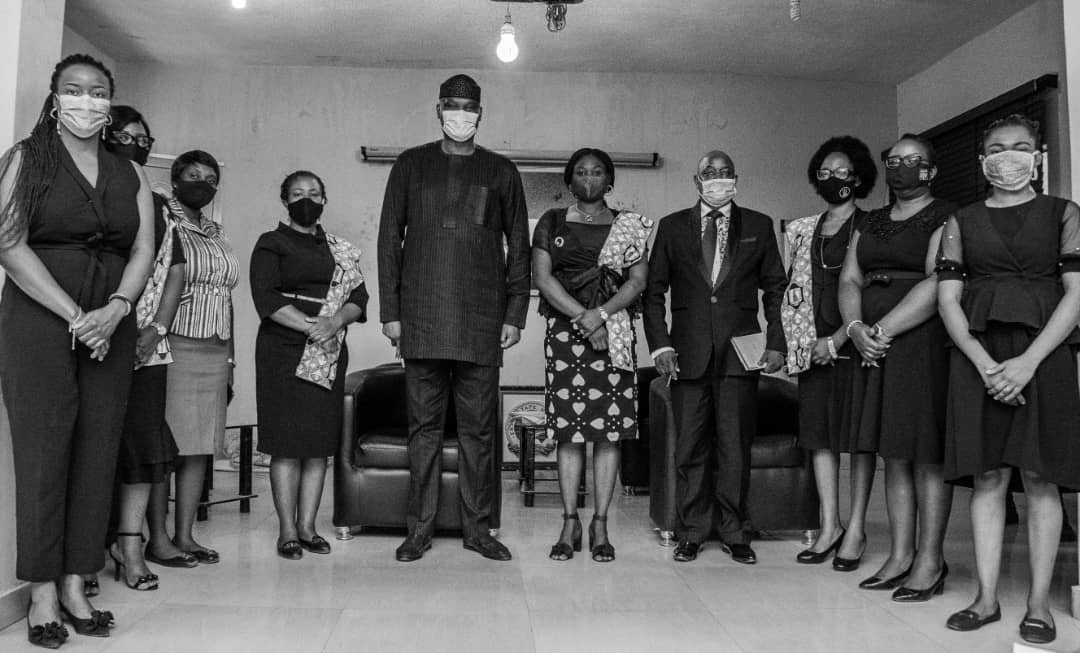 A delegation of Ekiti State branch of Federacion Internacional de Abogadas (F’IDA) has paid a courtesy visit on the Honourable Attorney-General and Commissioner for Justice Ekiti, Olawale Fapohunda.

The delegation which was led by the Vice Chairperson, Mrs Titi Ogunsina seized the opportunity to commiserate with the Honourable Attorney-General on the demise of the Branch’s former Chairperson Oluwaseyi Ojo Esq who was equally a Special Assistant to the Honourable Attorney-General. Mrs Ogunsina explained that the vacuum created by her demise is difficult to fill. She said Oluwaseyi Ojo’s death almost put F’IDA EKITI in disarray. She prayed for the repose of her soul.

Ogunsina thanked the Honourable Attorney-General for his tremendous support for F’IDA EKITI particularly, the appointments of F’IDA members to various committees in the State. She also appreciated the Government of Ekiti State as well as the Honourable Attorney-General for the establishment of Moremi Sexual Assault Referral Centre at Ekiti State University Teaching Hospital, Ado Ekiti. She said the establishment of the Referral Centre will go a long way at ameliorating the challenges faced by victims of sexual violence.

Ogunsina also seized the medium to tender the requests hereunder on behalf of F’IDA EKITI :

(1)Giving of Gender Sensitive matters to members of F’IDA who are not necessarily staff of Ministry of Justice for prosecution;

(3)More collaboration between the Attorney General and F’IDA EKITI among others.

Also, at the meeting, was the National Assistant Secretary F’IDA Nigeria; Mrs Rita Ilevbare and a former National Executive member of F’IDA. Mrs Oyinade Olatunbosun presented a letter of Appreciation to the Attorney General for celebrating her on her birthday.

Responding, the Honourable Attorney-General appreciated F’IDA EKITI for the visit. He explained that F’IDA needs collaboration with various individuals and organisations in order to fight the menace of Sexual Violence in our society as F’IDA cannot do it alone. He promised to always support F’IDA whenever the need arises. He urged F’IDA EKITI to encourage women to always participate at the highest level of decision making so as to making sure that their interests are protected at all times.